In The Office Part 1 I used a fake dataset which was good for what I wanted to demonstrate, but not as interesting as using real data. Text data is pretty fun to work with (at least I think so) and I decided to use the Enron email data for this post (title inspired by the book The Smartest Guys In The Room). This dataset was made publicly available during the Federal investigation into Enron’s accounting/business practices. You can download the original data at the above link, but in its current format it’s not super usable, so I’m going to clean it up first using the tidytext package.

Disclaimer: this post might not be 100% reproducible because of the amount of data and time it takes to process, but further down I will provide a link to the almost tidy dataset that can be used for tidy text analysis. If you’re trying to work with the data and having any issues, just message me and I’ll try to help.

Getting and Cleaning Messy Text Data

First get a list of all the files in the mail directory folder. Using recursive = TRUE will give the paths to all the subfolders, and full.names = TRUE will help to read in the data using map_dfr.

After getting the list, I’m subsetting it to only include one person’s mailbox for the purposes of this example. The very last person in the list has 557 emails to read in, which is not many compared to some of the other employees.

Then I can use map_dfr to read all of the emails into one csv all at one time, using read_delim because I want to use tab instead of comma as the delimiter. Otherwise I’ll be missing some of the data (like the email date). I know that if I read them in as a csv, there will only be one column and all the data will be stored in the rows, so I’m naming the column “data” so that they will all stack on top of each other and I don’t end up with 557 columns. The .id just tells me which file the data came from, which is going to be helpful for cleaning.

After reviewing the data, I noticed that the message header pretty much always(?) ends with the “X-FileName” row. I’m going to use that to separate the header data and make a tidy dataframe out of it. I’m flagging each row that contains “X-FileName” and using the cumulative sum function to basically make a column that will allow me to filter the email in two parts (message header and body).

If you scroll down in this table you can see where the 0 flag ends and the 1 flag begins to indicate the start of the message body.

Now I can filter to only include the header info. Some emails have a lot of rows in the header due to CCs and BCCs, so I’m going to use str_extract to make a new column with just the variables I want in my tidy dataset. These will become the new column names.

Finally, I will filter out any rows that don’t contain info I want to use. I’m also using str_remove to get rid of the new future column names in the data column so the data will be cleaner when it arrives at its final destination. Then I just use pivot_wider to spread out my new_col column to the column names and fill them with the corresponding data cells.

Now I have a tidy dataset with one row for each email. Each variable is a column and each value is stored in a cell.

I highly recommend you do NOT do this for the full dataset, because it’s a lot of data, takes a long time, and there are a couple of other issues that had to be handled that I’m not covering in this post. Basically what I did was put all of the above code into a function that I passed over the level one mail directories, saving each person’s folder into an .RDS format. I made a couple of adjustments to some problematic files, and then read them all into one dataset using purrr’s map_dfr.

To save you the trouble of doing all that, I’ve uploaded in the final tidy-ish format dataset here. The message body column is unnested into sentences so that you can perform most tidy text mining operations on it by unnesting the sentences further (into words, n-grams, etc.).

Using the sentences dataset, I first filtered out all of the “sentences” (rows) that had no letters (only numbers or special characters, blank spaces). Then unnest to words (one word per row), filter by letters only again, and use anti-join to remove stop words. The stop words dataset is built in to the tidytext package, so you don’t have to do anything special if you have that package loaded, just use it in your code and it will show up. I then did a word count to look for superfluous words that I could exclude to maybe cut down further on the size of the dataset. I filtered out words with special characters, and words with 15 or more letters, since those are usually just long strings of nonsense (forwarded emails, etc.).

This is what the unnested dataset looks like now.

For this part I’ll need the dates, so I’m going to filter out all the dates that aren’t within a reasonable time frame.

There are still some things that could be cleaned up. Some of these acronyms are part of email signatures, I don’t really want names in here, etc. Even though I have a tidy dataframe with one word per row, some of the words are still not usable, which is not a surprise considering this data was semi-structured at best prior to tidying.

The lexicon package has some datasets that might be useful for filtering out words I want to get rid of. For example, common first and last names. I also decided to use the function words dataset, which contains words like “almost” and “between”.

Exclude the words from the tidy_word dataset.

Get the number of emails sent per month, and word counts by month.

The bulk of the emails are from 2000 through 2002, and I don’t want any months that have really small values in this analysis because it will skew the percentages over time. I’m going to filter down to only months that have 1,000 emails or more, which would be August 1999 through April 2002. 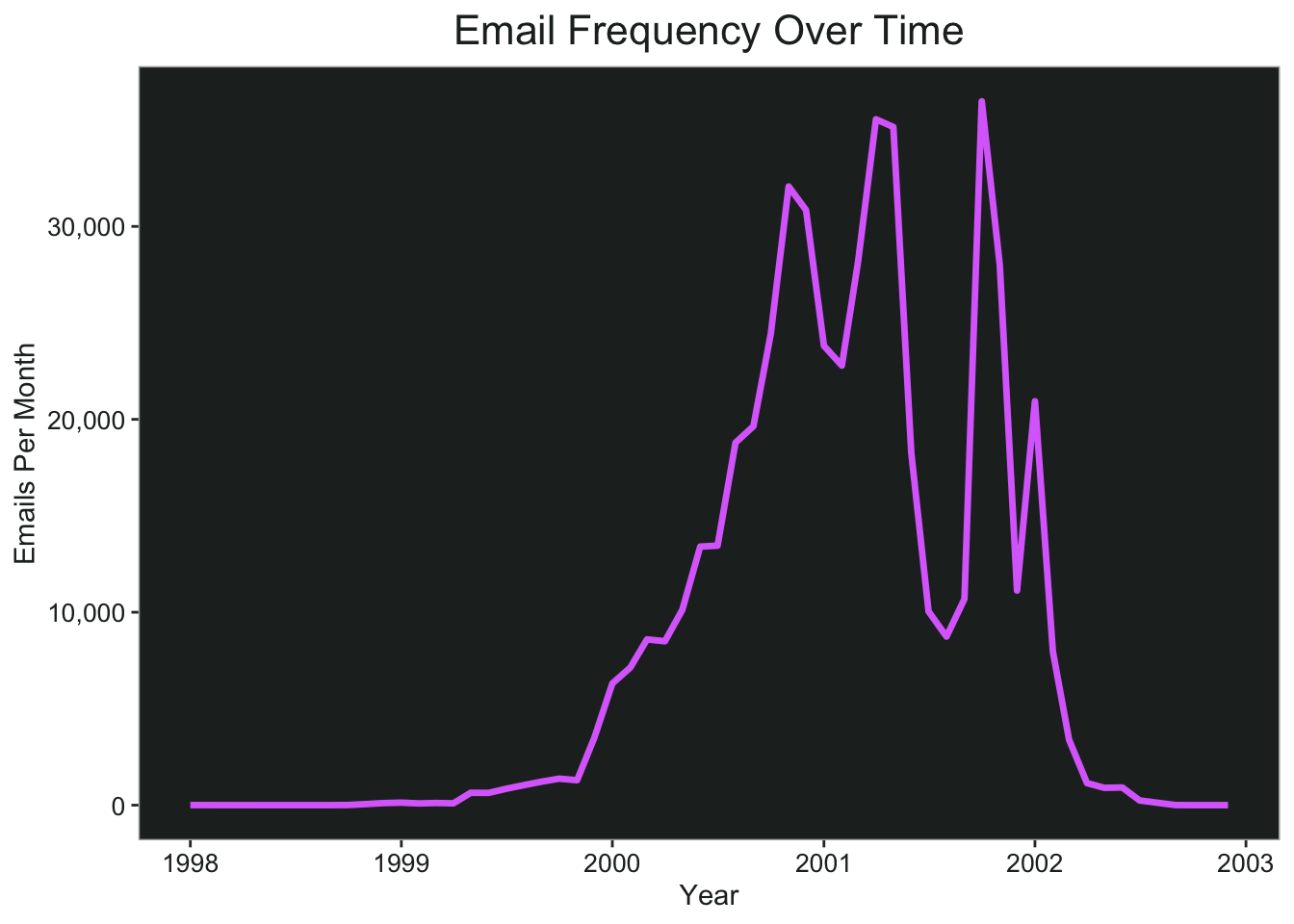 Now I’m filtering by date again, and I’m also filtering so that the word length is five or more characters, because the shorter words are not usually meaningful.

The next step is to fit a regression model to see if the word frequency is increasing over time. I got this idea from Variance Explained. However, that example uses news articles and the expected result is that the words increase (somewhat) steadily over time. I’m not necessarily expecting that to happen with the Enron dataset, but there should be at least some spikes of activity around the scandalous events that occurred leading up to Enron’s downfall.

Here are the words that increase over time. Very interesting that “underhanded”, “pocketbooks”, and “shredding” are all on the top of the list. If you scroll a few pages, you’ll also see words like “devastated”, “scandal”, and even “chewco”, which is one of the limited partnerships that Fastow set up to hide Enron’s debt (and led to its downfall).

I searched through the top results in the above dataframe, and picked out a few that might be interesting so I can plot them. 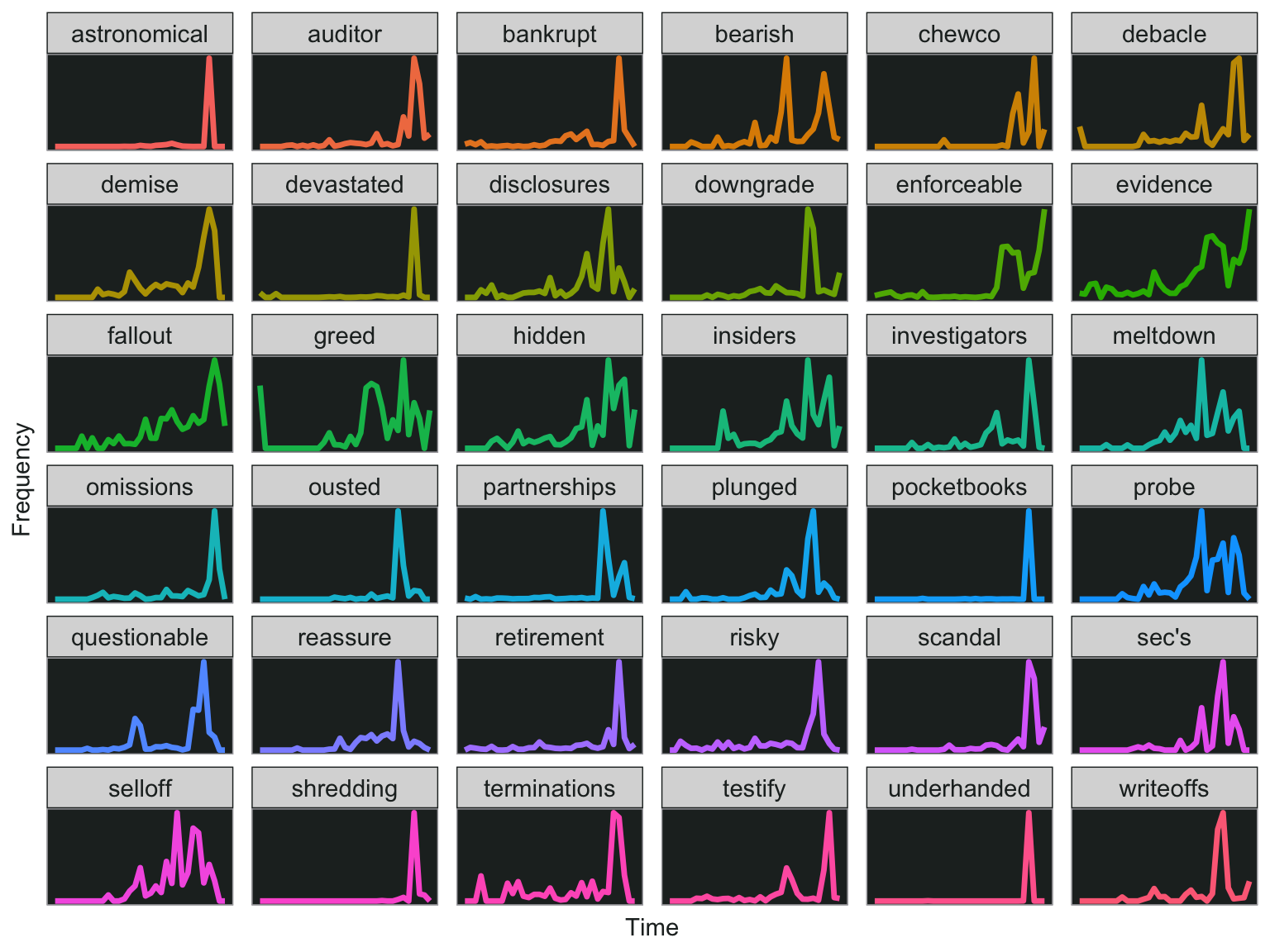 Let’s take a closer look at the word “shredding” since it seems pretty shady. Notice that the huge spike happens in January 2002, right around the time the U.S. Department of Justice announced a criminal investigation of Enron. Of course, the bankruptcy was announced in December 2001, so at first I thought it could be related to that. However, when I checked the word counts by month, there were 25 mentions of “shredding” in November 2001, none in December, and 459 in January 2002. 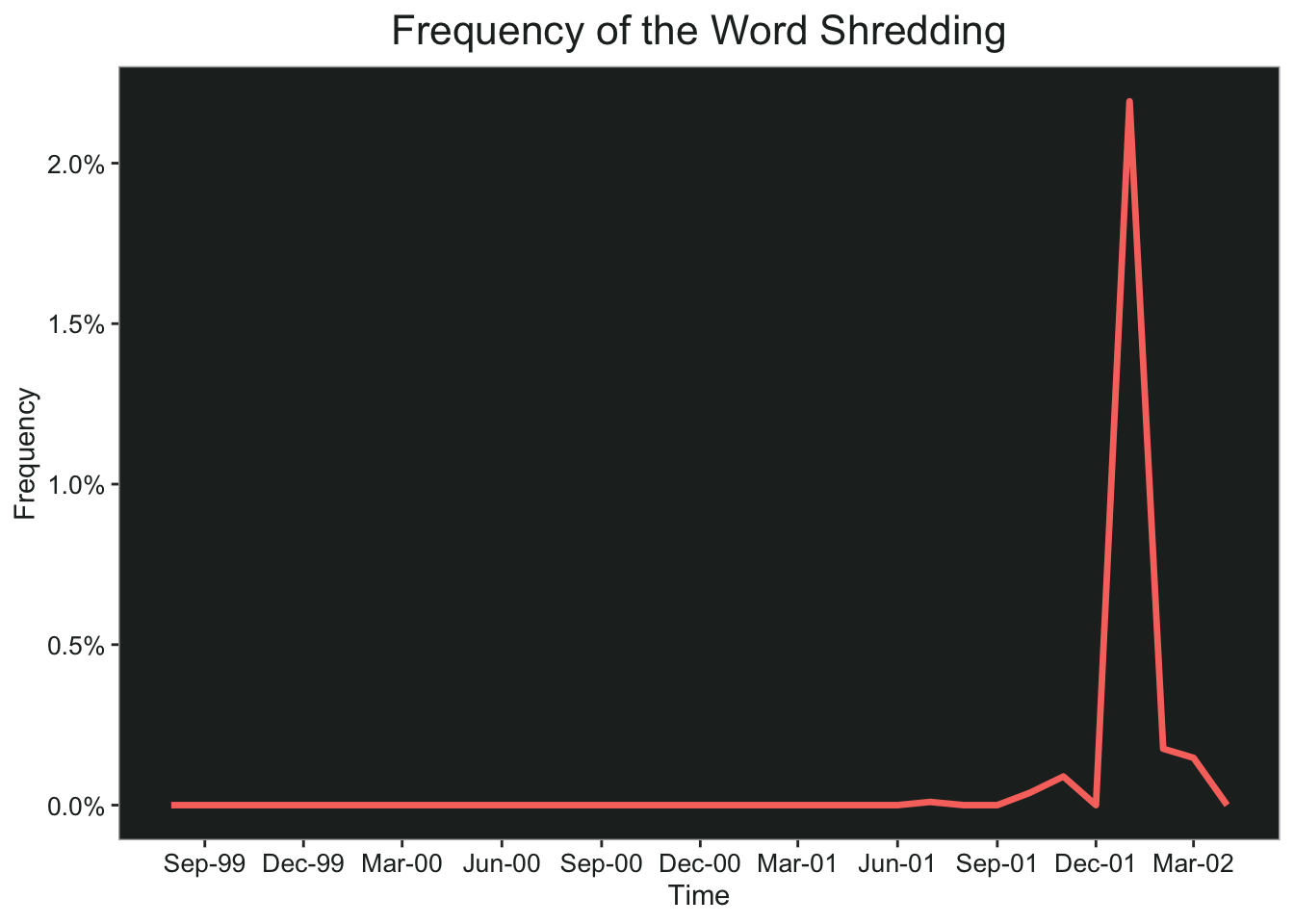 Here’s a fun word cloud of all the words from emails containing the word “shredding”. You can hover over the cloud and it tells you the total for each word.